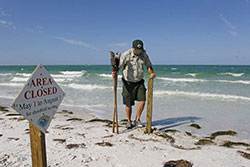 On each end of a 450 foot long section of the west side of Three Rooker Bar, you'll see signs indicating the closure of parts of the beach, in preparation for the May 1st to August 1st shorebird nesting season.

Various terns,  skimmers, gulls, some endangered, raise their young to fledglings on the island and if they get disturbed and fly from their nests their eggs could bake in the sun or be eaten by predators.  We need to share these special places with our avian friends and give them comfort and space to nest.  There are no pets allowed on Three Rooker, but it should still be stressed that dogs in particular should not be allowed on the island during this period.

Commenting on the different species that nest on the island, Honeymoon Island Park ranger and Environmental Specialist with Florida Park Service Dan Larremore said, “It’s a neat mix, a special density, it’s one of the top ten in the state of Florida for shorebird nesting.  Right in our own backyard.”  View an informative interview on Three Rooker with Dan.