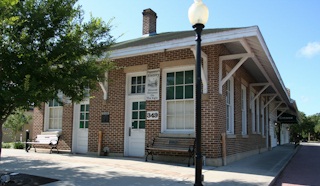 349 Main Street
located in the center of
downtown Dunedin

next to the Pinellas Trail.

The museum contains approximately 2,000 artifacts, 2,500 photographs and a library containing 200 volumes of local and Florida History. Included in the museum collection is a CD computer program of the Dunedin Times Newspaper, from 1924 through 1965. The collection includes antique clothing, household tools and utensils used by Dunedin pioneer families during the 1870's through the 1900's. City history includes original material from the Dunedin Post Office, Dunedin's first bank and other major companies in the Dunedin area, including the Orange Concentrate plant.

Railroad material includes posters and pictures of Florida railroads, railroad equipment, telegraph material, original material from the Dunedin Railroad station, and material that traces the evolution of railroad companies that flourished in Pinellas County and Florida. Permanent exhibit segments have been produced on regional topics such as Dunedin's multicultural origins, Dunedin's pioneering families, Mease Hospital, sports history of Dunedin, industries in Dunedin, development of the alligator tank used by the U.S. Marines during WWII in the Pacific, and natural habitats such as Caladesi and Honeymoon Isle. The museum hosts Florida related exhibits from the Florida Humanities, and Florida State Museum. Many of these exhibits now include hands-on activity for children.

The museum offers educational railroad and history camps during the summer for boys and girls between the ages of 9-11 years. The museum can be contacted for applications to these camps in April.

Education is paramount at the Dunedin Museum. Schools have the opportunity to borrow History Kits from past exhibits at the museum which contain photographs, artifacts and curriculum material related to Dunedin and Florida. Outreach programs include lectures and living history programs in the classroom at the teacher's request. The museum has also developed a Teachers Guidebook On Dunedin History for elementary schools and is available upon request.

The museum's library located on the second floor provides individuals with cultural and historical information about Dunedin, Pinellas County and Florida.

The Dunedin Museum has made it possible for different segments of the community, including minorities and those with special needs, to enjoy and learn about Dunedin and Florida history. The director has established programs to make the facility enjoyable for all. The City of Dunedin has completed all ADA requirements at the museum, making access available to all.