All City buildings are currently closed to the public.  This includes the Library, Recreation facilities and municipal services.  Get Updates Here. 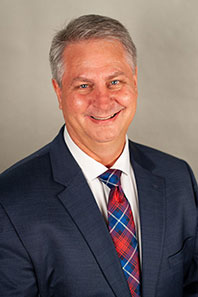 Email Jeff Gow
Jeff Gow was elected City of Dunedin Commissioner in 2018.  He was born and raised in Dunedin graduating from San Jose Elementary, Dunedin Highland Middle School and Dunedin High School.  He received his A.A. degree from St. Petersburg College (St. Petersburg Junior College at the time) and a Bachelor’s degree in Economics from Florida State University.

He has over 20 years’ experience in the financial services industry including CEO of Marion County Credit Union. He has been married for 26 years to his wife Carin and has 2 children, Lindsey and Chelsea.  He is proud to have raised them both in Dunedin.

Prior to becoming an elected official, he has been involved with the following local non-profit organizations for several years Dunedin Scottish Arts Foundation, Friends of the Hammock and Dunedin Music Society.  He is excited to begin representing Dunedin and the residents on the following County and City Boards: Tampa Bay Regional Planning Council, Dunedin Golf Club and Aid to Community Organizations.