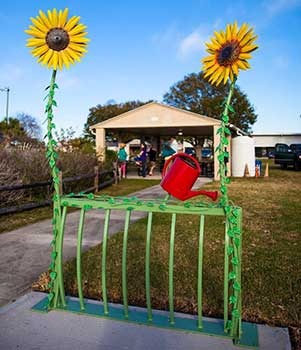 Check out the newest bike artistic bike rack in Dunedin at the Community Garden. Another great creation by Bill Coleman!

A new bike rack on the Dunedin Causeway, another great creation by Bill Coleman at the Institute for Creative Arts! 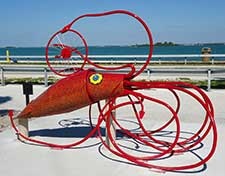 The City of Dunedin Artistic Bicycle Rack initiative was established in the late summer of 2009. The idea was borne following a trip by Matthew Campbell, Assistant to the City Manager to New York City and New England, where similar artistic bicycle racks were discovered in Manhattan and in West Hartford, Connecticut. Realizing that Dunedin and West Hartford both have authentic, pedestrian and bicycle friendly downtown areas complete with quaint stores and restaurants, the idea of establishing a similar program in Dunedin began to materialize. After researching and finding no artistic bicycle rack initiatives in Pinellas County, and minimally elsewhere in the State, Mr. Campbell introduced the program in Dunedin. 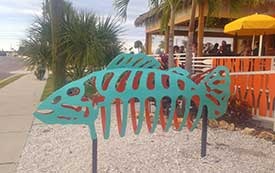 Throughout this project, staff never lost sight of the opportunity of utilizing public funding for a City bicycle rack. In April of 2011, Mr. Campbell and Phyllis Gorshe, Library Director were successful in commissioning an artistic bicycle rack at the Dunedin Public Library. With the help the Friends of the Library, the City’s Arts and Culture Advisory Committee, and Bill Coleman, a local fabricator, the Library now has two new bike racks in the shape and color of classic novels, with the pages of the open books serving as individual compartments for bicycles. Initially, a cost analysis revealed that the design, construction and freight of two similarly-sized bike racks could total $4,000 to $6,000, however staff was convinced the project could be accomplished for much less. As a result, a budget of $1,800 was established, and four months later, the City had its first public funded, artistic bicycle rack. Since completion of this rack, the City has commissioned the design and construction of a historic locomotive bicycle rack opposite Main Street and the Pinellas Trail. This rack is complete with a working light, bell, and badging that corresponds to one of the original locomotives that called on Dunedin via the Orange Belt Railway, now the modern Pinellas Trail. The latest artistic bicycle rack is placed downtown at the City's Purple Heart Park, and honors all branches of the U. S. Military for their service to our country. 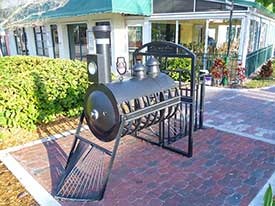 The City’s Artistic Bicycle Rack program represents a regional quality of life benefit to both the community and the environment, is innovative and is cost effective. Dunedin, along with a host of other Suncoast communities, can be enjoyed year-round. The ability to ride a bicycle and have adequate facilities for the same is an attractive quality of life that often cannot be enjoyed in other communities, without similar infrastructure or climate. The bicycle rack program further benefits the environment by providing residents an alternative mode of travel, and ultimately leads to a reduced carbon footprint. The artistic bicycle initiative also serves as a tremendous educational tool by promoting cycling awareness for the through a partnership with public art initiatives. One of Mr. Campbell’s original initiatives in introducing the Artistic Bicycle Rack program to Dunedin was to promote cycling as a leisurely way of “getting around” the City by individuals and families, ultimately bridging the gap between the stereotypical “spandex-clad” tri-athlete, and the resident on beach cruiser headed to their favorite watering hole.

Innovation with this project is clearly indicative with it being the first of its kind in Pinellas County, and one of only a handful of less organized efforts elsewhere in the State. Based on the amount of positive press coverage that the program has received to date, this program is considered “cutting edge” for Dunedin, and Pinellas County. Finally, cost effectiveness is evident in the City ultimately obtaining eight (and counting) artistic bicycle racks for less than half the cost of one (1) artistic bike rack, though use of significant private and public partnerships.