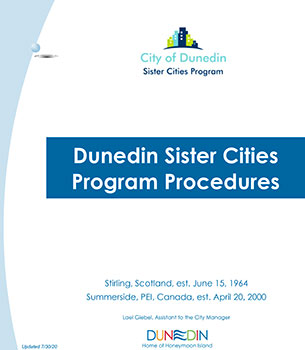 Sister Cities International was founded in 1956 by President Dwight Eisenhower, along with the People to People Program, as a way to create and strengthen partnerships between people from different communities around the world.   By forming these relationships, President Eisenhower reasoned that people from different cultures could understand, appreciate, and celebrate their differences while building partnerships that would lessen the chance of new conflicts.

"A sister city…is a broad-based, long-term partnership between two communities in two countries. A relationship is officially recognized after the highest elected or appointed official from both communities sign off on an agreement to become sister cities."

In 1964, the City of Dunedin invited the Town Council of Stirling, Scotland to enter into a Sister City relationship in order to share in an exchange of ideas, cultural achievements, correspondence, club affiliations and visitors, creating good will between the two communities. This invitation was motivated by the fact that the City of Dunedin was originally settled by Scottish families, a heritage which has been continuously honored through the use of Scottish bagpipes, band uniforms and street names, among other things. Pride in this heritage is also evidenced by three civic groups: the Dunedin Scottish Arts Foundation, the Scottish American Society of Dunedin, and the Dunedin New World Celts.

The City of Dunedin is proud of this longstanding relationship, and in addition to the on-going visiting delegations between the two governments, we are currently working to establish the following exchanges:

A trade exchange between the Dunedin Chamber of Commerce and Forth Valley Chamber.

An art exchange between the Dunedin Fine Art Center and the Stirling Smith Art Gallery & Museum.

A virtual student exchange between Dunedin and Stirling middle and high schools.

The full Sister Cities Program manual can be accessed here.