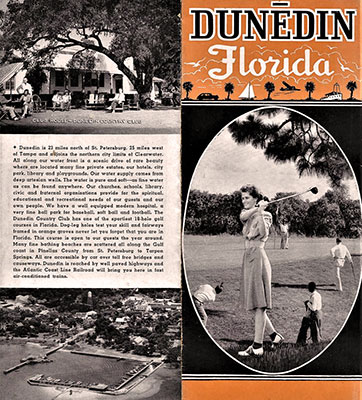 Richard L. Garrison was the first person given a land grant in Dunedin in 1852. The settlement was originally named Jonesboro by George Jones, the owner of the area mercantile. Two Scotsmen, J.O. Douglas and James Somerville, later named the settlement Dunedin after applying for the first post office in northern Pinellas County. The name is taken from Scottish Gaelic Dùn Èideann, the Scottish Gaelic for Edinburgh. With a dock built to accommodate larger sailing vessels, Dunedin became an important trading center and at one time it had the largest fleet of sailing vessels in the state.
"Delightful" Dunedin's village-like atmosphere and a relaxed lifestyle has lured people for decades from around the world. Enjoying the natural wooded and subtropical setting and close to four miles of picturesque waterfront, Dunedin sits on central Florida's west coast, in the heart of Pinellas County's Suncoast. It is also one of the few open waterfront communities from Sarasota to Cedar Key where buildings do not obscure the view.


It may be the world's healthiest climate and the year-round outdoor fun that brings visitors to Dunedin, but it is Dunedin's village quaintness coupled with its progressive vision and masterful planning that keeps them here. It is not surprising that many seasonal visitors elect to stay once they discover Dunedin is without the trappings and congestion of most Florida resort towns. 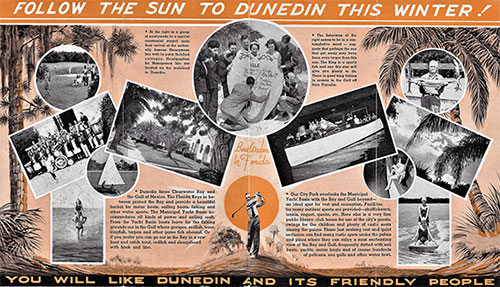 The first land deed was recorded in 1852 by Richard L. Garrison, only seven years after Florida became a state. Although it was George L. Jones who put up a sign over his General Store in 1870 that read "Jonesboro," a petition in 1882 by two Scottish merchants, J.0. Douglas and James Somerville, officially named the Post Office, then the town itself, Dunedin. The town became incorporated in 1899.

Dunedin is proud of its "firsts" which are chronicled in Dunedin Through the Years by William L. Davidson. The amphibious tractor, the Alligator, assembled in Dunedin and used in World War II, played a decisive role in the Pacific phase of the war. Frozen orange juice concentrate, and the "Pram" sailboat racer both originated here. Dunedin was the first home of the prestigious PGA (Professional Golfers Association). The first radio signals from Pinellas County were sent from Dunedin. The oldest continuous garden club on Florida's west coast is the Dunedin Garden Club.

The historic Orange Belt Railroad Depot on Main Street is home to the Dunedin Historical Society and Museum. The Society has designed a walking tour of historic sites and works hard to collect area artifacts and preserve buildings that are pertinent to Dunedin's past. Through their efforts, the Douglas home and Andrews Memorial Chapel have been put on the National Register of Historic Sites.

Dunedin's quality of life is linked to its appreciation of its diverse and colorful past, and to the country that helped shape its future, Scotland. In commemoration of its ancestral ties Dunedin has chosen Stirling, Scotland, and Summerside, Prince Edward Island as its sister cities.